Over $1 million raised over the past 15 years

National Hockey League (NHL) Hall of Famer Mark Messier and his family have been deeply involved with Tomorrows Children’s Fund (TCF) for the past 15 years. During his involvement with TCF, Mr. Messier has helped raise more than $1 million through various fundraising initiatives. In addition, he has been to HackensackUMC numerous times to visit children undergoing treatment for cancer or serious blood disorders; sitting with them for hours, taking pictures and oftentimes autographing a hockey stick or providing them with a keepsake.

Because of Mr. Messier’s commitment, TCF has named the “Mark Messier Skyway for Tomorrows Children” in his honor at HackensackUMC. He is the first athlete ever to receive an honor of this kind. The Skyway joins the DON IMUS-WFAN Pediatric Center to the Sarkis and Siran Gabrellian Women’s and Children’s Pavilion, a multi-story pavilion home to the Joseph M. Sanzari Children’s Hospital, the Donna A. Sanzari Women’s as well as the Skyway. The Mark Messier Skyway for Tomorrows Children is a place where children can relax and play during their stay at HackensackUMC. Mr. Messier has transformed the skyway into a hockey fantasyland; complete with interactive videos, games and personal memorabilia, marking some of his most memorable NHL milestones.

Mr. Messier is honorary vice president of the Tomorrows Children’s Fund and has been an honorary member of the HackensackUMC Board of Governors since 2001. He and Donald Trump shared the duties of honorary co-chairmen in 2004 at the AT&T Steven A. Cox Charity Golf Classic, which raised more than $700,000 for TCF, CJ Foundation for SIDS and the Imus Ranch. 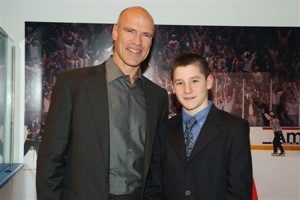