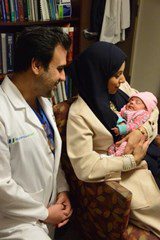 When 35-year-old Ohoud found out she was pregnant with her third child, she and her husband were ecstatic.  The couple lives in Saudi Arabia and have been planning to add to their family.  But, then the couple’s happiness turned to dread.  Ohoud was told she had a serious pregnancy condition called placenta accreta, which occurs when blood vessels and other parts of the placenta grow too deeply into the uterine wall. This can cause severe blood loss after delivery. Ohoud was told that after her child was delivered, she would have to undergo a hysterectomy.  She was devastated.

“In my country, if you don’t have a uterus, you are not a woman anymore.”

In search of an alternative, Ohoud sought advice from five doctors, hoping someone could help her.

“All of them said they would not be able to save my uterus. The last doctor is the one who encouraged me to come to the United States.  He gave me medical permission to fly.”

Ohoud learned about the Center for Abnormal Placentation (CAP) at Hackensack University Medical Center, a member of Hackensack Meridian Health.  She contacted Abdulla Al-Khan, M.D., the director of the center and the division director of Maternal-Fetal Medicine & Surgery at HackensackUMC. The family immediately flew to New Jersey to meet with Dr. Al-Khan.

“I did the assessment and we did an ultrasound and MRI and agreed with her doctors in Saudi Arabia that she had abnormal invasion of the placenta in the uterus,” said Dr. Al-Khan.  “The definitive surgery for accreta has always been a hysterectomy.  But, the patient looked at me and said, ‘Doctor, I really don’t want to lose my uterus. The psychological implications of me losing my uterus at my age and dealing with my social background and knowing I’d be permanently sterilized, it would be devastating. Ohoud looked at me and said, please if there is anything you can do, please save my uterus.’”

“We were able to tie off some of the blood supply to the uterus and with innovative techniques, we were able to take out the entire placenta, which had invaded into the front wall of the uterus, and was touching the bladder. We reconstructed her uterus completely and saved it.  To my knowledge, this is the first time this procedure to reconstruct and preserve a uterus has ever been performed in the United States.”

HackensackUMC has the largest volume of deliveries as a single institution in the Tri-state area, with more than 6,300 births annually. Established nine years ago, the Center for Abnormal Placentation performs the most placenta accreta surgeries in the country. As a result, the hospital has become an active referral center for mothers in special situations.

“I am extremely proud of our committed team in the Division of Maternal-Fetal Medicine and Surgery and their tireless work to find innovative solutions that ensure the best care for our patients and their families,” said Manuel Alvarez, M.D., chairman, Department of Obstetrics and Gynecology at the Donna A. Sanzari Women’s Hospital at HackensackUMC. “I commend them for the groundbreaking work they do every day to decrease maternal complications, which greatly improves outcomes for mothers and babies.”

In 2015, HackensackUMC’s Department of Obstetrics and Gynecology received a $3,316,475 grant to measure pregnancy complications involving the placenta in real-time, using automated 3-D ultrasound tools.  The grant, from the National Institute of Child Health and Human Development (NICHD) and the National Institute of Health’s Human Placenta Project, is being used to enhance HackensackUMC’s innovative collaborative research program with University of Oxford physicians in the United Kingdom for the early detection of at-risk pregnancies. Through the grant, a four-year program is being developed that will test ultrasound techniques in the first trimester of pregnancy in an effort to better diagnose an increasingly common, life-threatening complication called Abnormally Invasive Placenta (also known as placenta accreta), which occurs in about one out of every 2,500 women.

“I commend Dr. Al-Khan and his team for the cutting-edge research and work they are undertaking to help those patients with at-risk pregnancies, saving the lives of countless mothers and their newborns,” said Lisa Tank, M.D., vice president of Medical Affairs and chief of the Division of Geriatric Medicine at HackensackUMC.

Dr. Al-Khan says the reconstruction of a patient’s uterus opens up a whole new area of possibilities for women who are told they would otherwise have to have a hysterectomy due to complications of placenta accreta.

“True salvaging of the uterus at this point in the game is an extremely rare entity.  But, we did so because we felt the uterus was salvageable and because of Ohoud’s strong desire and passion to keep her uterus. This is truly something I never thought could be possible.  But, now it is for certain patients.”

Ohoud and her family couldn’t be more proud of their new bundle of joy and are truly grateful to Dr. Al-Khan and his team.

“These amazing doctors and nurses at HackensackUMC saved my life, saved my uterus and saved my baby.  It is God’s blessings that led me to Dr. Al-Khan and that he was able to help me. He did a great thing for me and I am forever indebted to him.”

HackensackUMC, a 775-bed nonprofit teaching and research hospital located in Bergen County, NJ, is the largest provider of inpatient and outpatient services in the state. Founded in 1888 as the county’s first hospital, it is a member of Hackensack Meridian Health, one of the largest networks in the state comprised of 28,000 team members and more than 6,000 physicians. HackensackUMC was listed as the number one hospital in New Jersey in U.S. News & World Report’s 2016-17 Best Hospital rankings – maintaining its place atop the NJ rankings since the rating system was introduced. It was also named one of the top four New York Metro Area hospitals. HackensackUMC is one of only five major academic medical centers in the nation to receive Healthgrades America’s 50 Best Hospitals Award for five or more years in a row. The medical center is one of the top 25 green hospitals in the country according to Practice Greenhealth, and received 25 Gold Seals of Approval™ by The Joint Commission – more than any other hospital in the country. It was the first hospital in New Jersey and second in the nation to become a Magnet® recognized hospital for nursing excellence; receiving its fifth consecutive designation in 2014. HackensackUMC has created an entire campus of award-winning care, including: the John Theurer Cancer Center; the Heart & Vascular Hospital; and the Sarkis and Siran Gabrellian Women’s and Children’s Pavilion, which houses the Joseph M. Sanzari Children’s Hospital and Donna A. Sanzari Women’s Hospital, which was designed with The Deirdre Imus Environmental Health Center and listed on the Green Guide’s list of Top 10 Green Hospitals in the U.S. HackensackUMC is the Hometown Hospital of the New York Giants and the New York Red Bulls and is Official Medical Services Provider to The Barclays PGA Golf Tournament. It remains committed to its community through fundraising and community events.