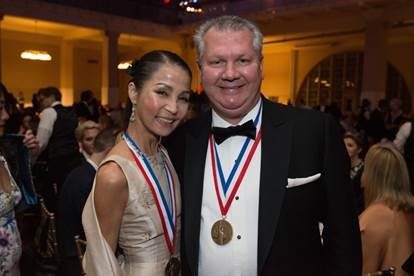 “Ellis Island remains an iconic symbol of hope, new beginnings and freedom. NECO’s Medals of Honor stand to remind citizens to support ethnic inclusion, diversity and the pursuit of the American Dream for all,” said NECO Chairman Nasser J. Kazeminy.

According to NECO, the medal recognizes individuals who have made it their mission to share their wealth of knowledge, indomitable courage, boundless compassion, unique talents and selfless generosity with those less fortunate; all while maintaining the traditions of their ethnic heritage as they uphold the ideals and spirit of America.

The U.S. Senate and House of Representatives have officially recognized the Ellis Island Medals of Honor, and each year the recipients are listed in the Congressional Record.

In its 31st year, the Ellis Island Medal of Honor ceremony was held on Ellis Island on May 13. The ceremony, which was followed by a black-tie gala dinner in the historic Great Hall, took place in the original registry room, a gateway for millions of immigrants to the U.S.

About NECO
The National Ethnic Coalition of Organizations – NECO- was created on the conviction of its founders that the diversity of the American people is what makes this nation great.  Its mission is to honor and preserve this diversity and to foster tolerance, respect and understanding among religious and ethnic groups. NECO is the sponsor of the Ellis Island Medals of Honor which are presented annually to American citizens, both native born and naturalized, who have distinguished themselves within their own ethnic groups while exemplifying the values of the American way of life. For more information, visit: http://www.neco.org/.