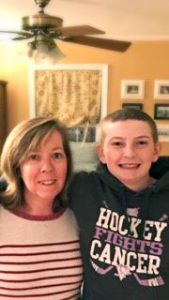 Anne O’Malley, Fair Lawn, NJ is taking her enjoyment for running and making a difference for pediatric cancer research. By running in this weekend’s 2018 United Airlines NYC Half, she is also raising money for Tackle Kids Cancer, a campaign to raise funds for the Children’s Cancer Institute at Hackensack Meridian Health, where her 15 year-old son is currently being treated for leukemia.

“Last April, our family received the devastating news that our youngest son, Sean, had leukemia. He was a high school freshman at the time and the diagnosis seemed to come out of nowhere. Thankfully, he has received excellent care at Hackensack University Medical Center and has been in remission since the end of the first month of treatment,” said Ms. O’Malley.

After taking a leave of absence from her teaching position to care for Sean, Anne’s escape has been running. The United Airlines NYC Half is Anne’s second official big race after her first race, the Get In Shape for Women Half in 2015. Running provides Anne with time to refocus, find some calm and zone out of the day to day that comes with Sean’s diagnosis. Anne has been training, preparing and will ultimately complete the 13.1-mile race for Tackle Kids Cancer.

“We are so proud of Anne and all of our runners in the 2018 United Airlines NYC Half who are raising much needed funds for pediatric cancer research. Because of these funds, our clinicians and researchers are making strides by advancing research and providing children access to the highest level of care,” said Helen A. Cunning, interim president of the Hackensack University Medical Center Foundation.

Tackle Kids Cancer is an official charity partner for the 2018 United Airlines NYC Half. Tackle Kids Cancer raises funds to support crucial pediatric cancer research and innovative patient care programs occurring at the Children’s Cancer Institute at Hackensack University Medical Center. With over $5 million raised in the past two years, each dollar is bringing us closer to the mission – a world free of childhood cancer.

“We are proud to welcome Tackle Kids Cancer as an official charity partner of the 2018 United Airlines NYC Half,” said Christine Burke, vice president of runner products and services for New York Road Runners. “Our charity partners are an integral part of the United Airlines NYC Half and provide thousands of runners dedicated to making a difference in the lives of those in need an opportunity to add meaning to their miles.”

“Sean still has a long journey in front of him and will remain in treatment until the summer of 2020. I wanted to do something to give back to the Children’s Cancer Institute which has done so much for us,” said Anne.

The race, which will take place on Sunday, March 18, will have an expanded field with an expected 22,500 runners and will feature a completely redesigned course, taking runners on a 13.1-mile tour of iconic city landmarks beginning in Brooklyn and finishing in Central Park in Manhattan.

Photo caption:
Anne O’Malley, Fair Lawn, NJ, pictured at left, is running the 2018 United Airlines NYC Half for charity partner, Tackle Kids Cancer that supports pediatric cancer research at the Children’s Cancer Institute at Hackensack Meridian Health where her 15-year-old son, Sean pictured at right, has been treated for leukemia since last spring.

About New York Road Runners
Founded in 1958, New York Road Runners has grown from a local running club to the world’s premier community running organization, whose mission is to help and inspire people through running. NYRR’s commitment to New York City’s five boroughs features races, community events, youth running initiatives, school programs, and training resources that provide hundreds of thousands of people each year, from children to seniors, with the motivation, know-how, and opportunity to Run for Life. NYRR’s premier event, and the largest marathon in the world, is the TCS New York City Marathon. Held annually on the first Sunday in November, the race features 50,000 runners, from the world’s top professional athletes to a vast range of competitive, recreational, and charity runners. To learn more, visit www.nyrr.org.