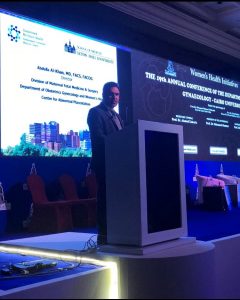 “In today’s day and age, no mother should die of a childbirth complication,” said Dr. Al-Khan. “Every mother should live to raise a healthy child.”

Dr. Al-Khan discussed the high rate of cesarean sections and the accompanying risk of problems associated with placental formation in subsequent pregnancies, including increased incidence of placenta accreta, a high-risk pregnancy complication that happens when the placenta becomes embedded too deeply in the uterine wall.

Dr. Al-Khan offered strategies for addressing these issues. He described his team’s approach, from a surgical and a scientific perspective – and called for further discussion to promote improved outcomes on behalf of women and their families.

“I want to commend Dr. Al-Khan for sharing his expertise on a global level, working across borders to advance the health and well-being of women and their babies,” said Ihor S. Sawczuk, M.D., president of Hackensack University Medical Center. “He fully embodies our mission to provide the highest quality, human-centered care.”

The Center for Abnormal Placentation at Hackensack University Medical Center provides a multidisciplinary team of specialists from the departments of Anesthesiology, Urology, Vascular Surgery, Radiology, Intensive Care, Plastic Surgery, Neonatology, Nursing, and Pathology. This innovative program has been developed and designed to serve as a model for regional, national and international institutions.

“It’s humbling,” Dr. Al-Khan said, reflecting on his desire for continued collaboration with colleagues around the world. “They reached out for help from more than 5,000 miles away.”