At Hackensack University Medical Center, our interprofessional team of neuroscience specialists—led by fellowship-trained neurologists and neurosurgeons—provides comprehensive treatment for patients with Parkinson’s disease and other movement disorders. The care of these disorders requires an integrated approach including medical, rehabilitation, psychological, neuropsychological, dietary, surgical, and supportive care. Our team aims to offer each and every patient the most advanced and compassionate care to maintain well-being and quality of life.

While many movement disorders affect adults, children can have them as well. Our pediatric neurologists are experts in the care of such problems and see patients from birth through their 22nd birthday.

We Treat All Types of Movement Disorders

Parkinson’s disease is the most common type of movement disorder. This slowly progressive disorder of the nervous system can result in a slowing of movement, a low voice volume, tremor, rigidity, imbalance, and in some cases, alterations in behavior and thought. Patients may also experience changes in sleep, bladder, and bowel function. There are very good treatment options for Parkinson’s.

Because the diagnosis and treatment of this disorder requires subspecialty training and experience, it is important to seek the advice of a movement disorder specialist. There are other conditions which may mimic Parkinson’s disease, so a correct diagnosis is critical to ensure you receive the most appropriate therapy. Disorders that may resemble Parkinson’s disease include:

In addition to Parkinson’s disease and Parkinson’s-like disorders, we also specialize in the care of these movement disorders:

Although there is not yet a cure for Parkinson’s disease, there are excellent treatments that help control symptoms. We individualize and adjust your treatment to find the most effective and convenient regimen that will improve your physical and cognitive function and quality of life. Medications form the mainstay of treatment. Several classes of medications exist that can help the various symptoms of Parkinson’s disease, and some of these medications are also useful for other movement disorders. While initially patients may take a single medication, over time, they often do better taking combinations of several medications. Certain symptoms can be alleviated by “chemodenervation”—the use of botulinum toxin injections (Botox®) or similar agents.

Some people with movement disorders are candidates for surgical treatment. Getting a patient ready for surgery requires a great deal of planning, including neuropsychological testing. The neurosurgeons at Hackensack University Medical Center perform the largest number of such surgeries in New Jersey and are highly skilled in the following treatments:

Deep brain stimulation (DBS) is a surgical treatment for Parkinson’s disease, essential tremor, and dystonia. FDA-approved since 1997, DBS is like a pacemaker for the brain. The surgeon implants a small wire in specific areas of the brain that are involved in movement disorders. The wires are passed under the skin down to the chest, where the pacemaker is implanted. The pacemaker delivers a small electrical stimulus to the affected brain regions, helping to reduce symptoms. Hackensack University Medical Center is one of only a handful of elite institutions in the country with the facilities and expertise to perform MRI-guided DBS surgery.

This procedure is for patients with essential tremor or tremor-dominant Parkinson’s disease. It targets a part of the brain called the thalamus. A radiofrequency generator or Gamma Knife stereotactic radiosurgery is used to target the affected area of the brain with radiofrequency energy or radiation to create precise lesions that stop or reduce tremors.

Stereotactic radiosurgery or radiofrequency ablation is used to create a small lesion in a part of the brain responsible for movement control called the “globus pallidus.” While these treatments have been largely replaced by DBS for people with Parkinson’s, they may be an option for some patients who cannot undergo DBS.

In general, a nutritious and complete diet is the foundation of healthy living, regardless of any neurological disorder. With Parkinson’s disease in particular, some food interactions may reduce the effects of medications, and there are certain other foods that you may need to avoid. In addition, some people with Parkinson’s disease may have trouble swallowing. Our registered dietitians work closely with our doctors to design a specific dietary plan to fit your needs, to provide education, and to help you navigate some of these challenges.

Sometimes patients with Parkinson’s disease are admitted to the hospital for reasons unrelated to Parkinson’s, such as an orthopedic problem or diabetes. If the treatment team does not pay close attention to providing optimal Parkinson’s care—such as giving medications exactly on time and avoiding contraindicated medications—symptoms may get worse, which can prolong the hospital stay and increase the risk of falls. Hackensack University Medical Center has pioneered the optimal inpatient hospital care of people with Parkinson’s disease by developing innovative protocols and increasing awareness throughout the entire hospital about what these patients need. We became the first hospital in the nation to receive special certification for Parkinson’s disease care from the Joint Commission. If you have Parkinson’s and need to be admitted to our hospital, you can be certain that you will receive extra attention to ensure your safety and appropriate treatment.

Helping You Adjust to Life with a Movement Disorder

People living with a movement disorder at any age may experience significant emotional challenges, whether the condition is stable or progressive. Work and school performance and quality of life can suffer as a result. Family members may need to adjust as well. Some patients may experience a lack of desire to participate in activities that previously brought them enjoyment. Others may develop problems with memory and planning their daily lives. Our counseling psychologists help our patients and their families develop the coping skills necessary to live well despite their illness. Our neuropsychologists help you understand problems with memory and planning and work with our cognitive rehabilitation specialists, who can help you function better despite such problems.

Studies are continuing to demonstrate that exercise can delay the progression of Parkinson’s disease. While physicians advocate for exercise for all, it may be especially difficult for a Parkinson’s patient to know the appropriate exercise regimen that would be most beneficial. We work closely with our Wellness Center to develop beneficial Parkinson’s-specific programs that will engage patients and promote a lifetime of healthy habits.

The Parkinson’s Disease & Movement Disorders Center team is comprised of specialists from:

Dr. Naomi Lubarr is a board-certified neurologist who specializes in movement disorders in patients of all ages, including Parkinson’s disease, chorea, ataxia, and tremor disorders. She earned her medical degree from the University of Pennsylvania School of Medicine and trained in neurology at Columbia University Medical Center, where she then completed a fellowship in movement disorders. She has published her work on movement disorders, particularly dystonia, in peer-reviewed scientific journals and has spoken at medical centers throughout the northeast about neurology. Dr. Lubarr is a member of the American Academy of Neurology and The Movement Disorders Society. 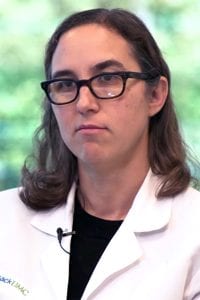 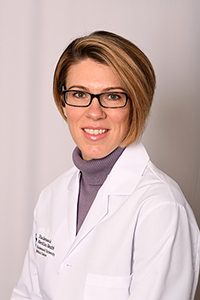 Dr. Brian Amorello is a licensed Counseling Psychologist in the Department of Neurology and the Neuroscience Institute of Hackensack University Medical Center. He earned a BA in psychology from Montclair State University and an MA in Counseling at Seton Hall University, then became a Licensed Professional Counselor. In 2016, he completed a PhD in Counseling Psychology at Seton Hall University, including an internship accredited by the American Psychological Association at the University at Buffalo and a fellowship at the University of the Sciences Student Health and Counseling in Philadelphia. He serves on the faculty of the Department of Neurology at Hackensack Meridian School of Medicine at Seton Hall University. Dr. Amorello has presented his research at state and national conferences, and has chaired various psychological organizations around New Jersey. He specializes in working with individuals across the life span with a variety of mental health concerns, including depression and anxiety. His work is grounded in cognitive behavioral therapy (CBT) and mindfulness, and he works with patients and their families to develop treatment goals that help patients optimize their quality of life, emotional wellbeing, and health behavior. Dr. Amorello is excited to work with the team at the Neuroscience Institute, because patients’ physical and psychological needs are best served by a collaborative interprofessional approach. He believes that strong relationships with patients, families, and healthcare professionals provide individuals with the opportunity to achieve both physical and mental health. 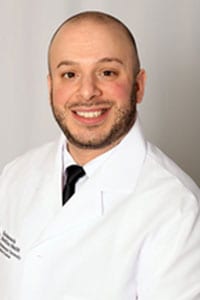 For patients with conditions of the brain, spine, or nervous system, world-class care can make all the difference. Our surgeons offer expertise in consultation, diagnosis, and treatment for all neurosurgical problems.

As an integral part of the Physical Medicine and Rehabilitation Department, occupational therapists work with a variety of patients due to the functional limitations associated with a disease or an injury.

Deep Brain Stimulation (DBS) is a surgical treatment for Parkinson’s Disease, essential tremor and dystonia. It has been FDA approved in the US since 1997 and there have been over 85,000 implants performed worldwide for the treatment of movement disorders.

Physical therapists work with a variety of patients due to the functional limitations associated with a disease or an injury.